This weekend I spent some time with the Transit Courier, which is the smallest van in the Transit range. Being a musician, I have a lot of experience touring in vans, driving vans and I’ve driven so many that I feel I have a pretty good idea of what I look for in a vehicle of this type.

My aim for the weekend was to find out how versatile the Transit Courier was as a day-to-day vehicle. Being a Musician and a Photographer, I have a lot of gear and having a safe means of transporting my equipment from place to place is crucial. However, when I’m not working, I’m just a regular guy doing regular everyday things.

Driving the Transit Courier for the first time, I was immediately surprised at how effortless it was. I really mean it when I say it feels like you’re driving a regular family car. There’s no adjustment period as the dashboard configuration and interior layout is perfectly conventional and intuitive. All you need to do is adjust your mirrors and seat position and you’re away!

Leaving the forecourt, I decided to head home to Chester which was about a 25 minute drive. Although I knew the way, I thought it would be a good opportunity to try out the Sat Nav. The centre console has a 6 inch touchscreen display which was a nice and responsive and easy to see whilst driving. All-in-all the Sat Nav performed well.

Next, it was time to assess the key characteristic of the Transit Courier, the loadspace in the back. I packed up my music equipment and decided to load the van. The sliding side door is a really nice feature as it made access so much easier. Vans without this feature are often more of a struggle as you can only access the loadspace via the back doors and this often means clambering over things when loading/unloading. At 2.3 cubic meters, the Transit Courier’s loadspace is generous. I never once felt like the loadspace was lacking. Whether you’re a musician/photographer like me, a tradesman, or an outdoor enthusiast who needs space in the back to carry around bikes or camping equipment then the Transit Courier isn’t to be overlooked.

Finally, it was time explore to day-to-day driving experience. I took the van to North Wales along some winding roads, up hills, and down narrow lanes to see how it faired in these real-world scenarios. As I mentioned earlier, you wouldn’t know you were driving a van. The ride was smooth and the van felt nimble.

‘And what about parking?’ I hear you say - a common concern for people when driving larger vehicles.Although there’s no conventional rear view mirror, the parking sensors are really helpful and the range of view in the driver side and passenger side mirrors is excellent. I didn’t find it difficult at all.

If your lifestyle necessitates the need transport belongings, goods, or materials, yet you want a vehicle that’s easy to adapt into everyday life then I definitely feel the Transit Courier is one to consider.

To learn more about the Transit Courier and our exclusive offers, just click here. Alternatively, just hit live chat and speak to a member of our team today. 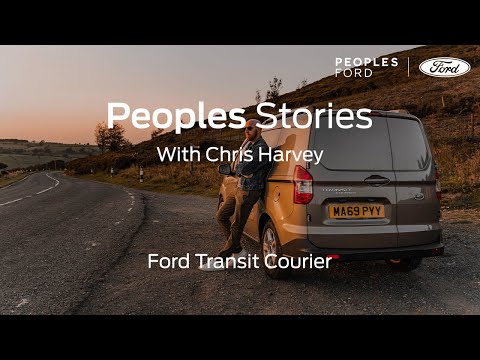